It’s taught by the lovely author , Iris krasnow. We share many passions. She has written 6 books about the different stages of the lives of women. She is a gift.

Our assignment for this week was to write about LOSS. I really appreciate  Iris b/c she’s no bullshit. She encourages us to go deeper, open up, be real and tell it all. She does NOT want us to tell “pretty- painted -white -fence” stories of our lives. She is a truth seeker. She infuses the classes and readings with meaningful questions and stories of women. ( our 2nd week reading had Cheryl Strayed original essay that became WILD. which is super intense, and others included Sandy Hook Stories.. you get the point).

Here is what I wrote for the class. It was the first time I have ever sat down and wrote out what I remember. The truth of why I left the schools, and the harsh reality of violence in our city. Thanks for reading. 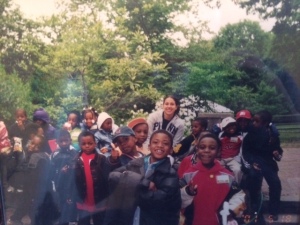 My class from West Philly when I was in grad school. Look at these cute kindergarteners. Love them!

black shoes, black socks. Grabbed my bag, jumped in my BMW and had a taste of my coffee.

I always smoked 1 cigarette on the way to work. At the same point, every day. I listened to Krishna Das on the stereo- “ om namah shiva, om namaha shiva”  everyday that spring.

Energizing and uplifting myself before I arrived to the church in Southeast DC.

On this particular day, at the end of March, I was thinking and thinking about the to-dos for the day. What children would need my attention, what parents would get a phone call, what teachers would need some support.

I arrived, got to my desk before everyone else and just got to work. As the boys came in, I greeted them and everything was normal.

After lunch and rest time, I asked one of the teachers to come down to the DC Public Schools main office so we could grab the new special education forms that we needed for the meetings I was responsible for scheduling. Parking can be such a nightmare on North Capital so I took the adorable and energetic 3 year old classroom teacher, Rita to help make the trip easier. We made plans to meet up with the rest of the staff for our spring happy hour at a local Mexican restaurant after school and told everyone just to meet us over there.. it was easier than heading back out to the neglected housing project, violent neighborhood where we worked.

While at the restaurant waiting for the staff, began- the calls started coming in. “where are you guys” “ we had a shooting” “ don’t come over here” “ we can’t leave” “ we don’t know what’s going on” “the cops are coming”  “ the boys are okay” “ the bus monitor was shot” “ we think he’s dead” “ pleasance, oh my god.”

The rest of the day is a blur. The next thing I remember is sitting at my dining room table, in the afternoon waiting for my husband to come home. I sat at the table in silence, in fear, drowning in the pain of the reality. HIS WORSE FEAR.

For years, he has supported my passion for urban education, “for changing the world.”  He said nothing about the long hours, the racial discrimination that I went through, the weekends and nights and mornings  I spent in the classrooms, or with the kids and families in southeast DC.

He never complained when I asked him for money for classroom supplies, or spent all my money on books and trips for the kids. He supported me. He knew I was fighting a tough battle, usually being one of the only white teachers on staff in the predominately african american schools….  (or as my students used to say, we are not african american- we are DC black. )

But this would be different, and I knew it. everything had changed. the line had been crossed, the trust had been broken. the thing he feared more than anything had happened.

a shooting at my school.

He walked in, asked what was wrong. he could see my innocence had been taken. my unrelenting persistence had been crushed, my dream dissolved. my passion and existence of the last 8 years, destroyed.

I could never go back in the same way again. I could never be fearless or naive or innocent again. Once it happens to you, it hardens you.  Something shifted. the reality hit hard.

I was grateful to have not been in the building. In fact, the teacher who was with me & I are the most sensitive and heart -on -your sleeve kind of women, and the whole team agreed – that it was a blessing that we were not on campus. that someone was looking out for us. EVERY OTHER TEACHER WHO WAS THERE THAT DAY HAD SEEN A MURDER OR DEATH BEFORE.

That day, I lost a big part of my identity. I grew up. I let go. I made a choice to step back and reevaluate my future, my life. I decided I could not go on, I needed to find a way out.

I called my dad, “help me. please come and help me.”

The Head of School wanted me to go and open the school the next morning at 8am.

To walk over the tape, past the police, unlock the blood stained doors. I wanted to get in my bed and never come out. She wanted me to stand strong, not flinch, push back. I wanted to fold, to crawl away, my heart was broken.

The next morning, somehow. I woke up. I showered, I put on my uniform. I made the coffee.

I smoked my cigarette, I got out of the car. I unlocked the door- I went to my office.

Life went on. But I was never the same. Just 3 weeks later I resigned and by May I was gone.

The board said we might be able to get security next year, but from K street they told me it was not in the budget for this year.

The grieving process is messy. I had the same nightmares, I replayed the same conversations in my head. I questioned my path, my purpose, my life.

This is all they had to write.

A 24-year-old school bus aide was fatally shot yesterday as he tried to run from an assailant into a church where he worked, police said.

Investigators think the Southeast Washington man, whose name was not immediately released, was attacked as he walked about 4 p.m. to his job at a charter school housed in Jones Memorial United Methodist Church. Shortly before the shooting, he got off a Metrobus on Benning Road SE, police said.

The gunman, whose age police estimated at 16 to 18, chased the man to the front steps of the church in the 4600 block of G Street SE and shot him six times, said Capt. C.V. Morris of the violent crimes branch, citing witness accounts.

Cmdr. Robin Hoey of the 6th Police District said that at the time of the shooting, students at Septima Clark Public Charter School were boarding a bus behind the church. The all-boys school has children in preschool to eighth grade.

The gunman fled on foot, police said. The victim was transported to Washington Hospital Center, where he was pronounced dead three hours later.

Hoey said police did not know whether the men knew each other. The motive for the shooting was not clear, police said.

Dive into this divine conversation with Brene and Elizabeth- it’s so incredible.  BIG STRONG MAGIC is the episode.

Only 20 minutes around our souls, creativity, no bull shit friendships and beliefs. Where we got stuck, how to move forward.

It’s just such a treat. 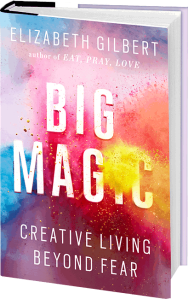 Here is what I mixed with my hands in the bowl..

*cant wait try again with whatever I can find in the pantry. ITS amazing!

I learned of a tragic death of a well known thought leader/ inspirational writer and much loved person, this week.

Here is the last post he wrote before he died. http://liveyourlegend.net/disconnect-to-connect/

And his famous Ted Talk. http://liveyourlegend.net/tedx/

“How to Find And Do Work You Love”

The time is now. There is no other day, my friends. It’s all really to short.

I got up early to make a list for today, to plan, to do and I’m just sitting here realizing, it’s okay. It’s okay to stop today and

NOT produce- not DO, not FINISH, not always PUSH so hard.. I had this awakening last night that while I coach others and

work with students in their addictions to work and the TOO MUCHNESS of our modern lives, I also have the SAME addiction.

it’s just that mine is in the realm of health and wellness.

Being ADDICTED to  yoga, meditation, teaching and the studio ( feedback, schedules, meetings, creating new ideas)  is not healthy, EITHER.

So, I’m going to contemplate on this today. While I TRY my best to take a bit of a break, go easy on myself and enjoy everything that appears in my path, today.  I am painfully aware of this SHORT, SHORT time we get together. and I’m just trying to figure out how to make it work for me to support my family WHILE enjoying each day that appears.. more soon.

This is the opening passage from Seth Godin, in Pema Chodrons new book on failing, Fail Fail Again. AMaAzing!

my darling teacher tells me this as an instruction to meditate.

Yikes, feels so big. what will happen if I do that? will I unravel or cry or fall down? become lazy, unreliable, disengaged?

My dad told me this as a child when I would get too crazy, hyper, loud or upset. It REALLY pissed me off.

will I loose control of the life to which I have no control? Will I wake up to this mystery & believe that all I love will ever be here again tomorrow, in the same way?

Will I get wild, loose my way, chart my course? Write my next chapter?

You cant busy yourself out of loss or imperfections.

Playing with my softer side- exploring the landscape of open fields or prairies instead of committees and endless thinking projects.

A life, telling the to-do lady to hush and the to-be lady its okay. 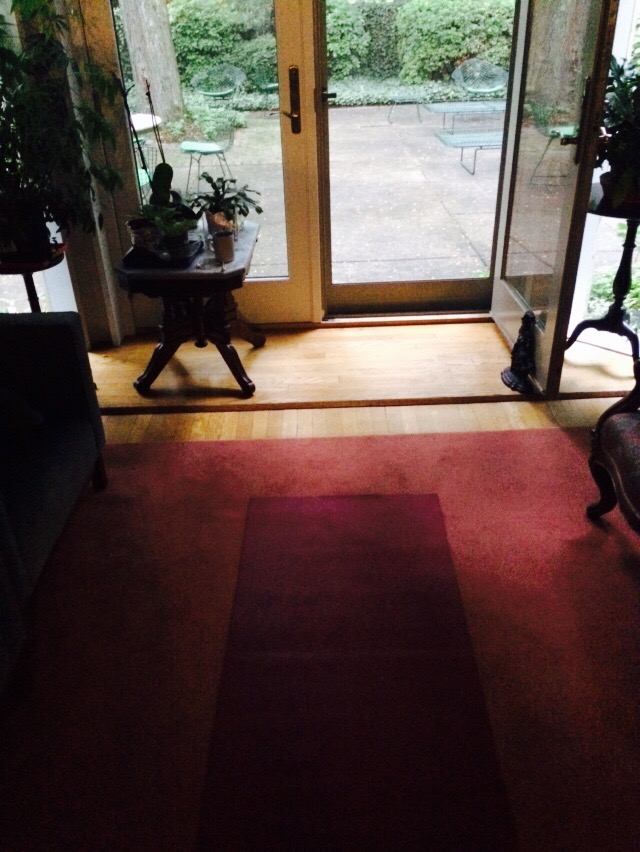 Hi Welcome to My Blog

I believe in self awareness & discovery to unlock our full potential. I passionately encourage my own friends, students and children to be the fullest most vibrant versions of themselves. I teach yoga, work with health clients...read more

I’m Pleasance, a holistic health coach who helps super smart, successful women integrate wellness and wisdom practices in their biz or in their home.

I can't wait to connect with you.